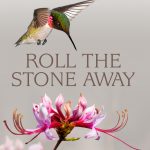 “Hite gives voice to Southern Appalachian culture – the haunted landscape of hills and hollows that make perfect habitats for spirits of all kinds.” – Historical Novel Society

I was introduced to Ann Hite’s first book, GHOST ON BLACK MOUNTAIN, through the Historical Novel Society and soon after I found that the author was local to my area. When I later met her and part of her lovely family at a book signing, I knew she was genuinely invested and intrigued with history. You can see how writing excites her and how much she loves talking about it. As each subsequent book in the series appeared, I eagerly snapped them up. Last year, the Historical Society in Powder Springs invited Ann to speak at one of their Genealogy meetings, and she talked about her research, mentioning that she was working on a memoir due out in the Spring. Having enjoyed the characters in her saga immensely, and that they were modeled on real people from the past, I was anticipating ROLL THE STONE AWAY with delight. It did not disappoint!

Lately I have been drawn to mid-20th century culture and history, and this book fits the bill perfectly. Ann relates her experiences with having a grandmother who was a Rosie the Riveter turned salesperson at Rich’s Department Store, the Cold War (she lived at Hahn military base in Germany for a time), and the 1960’s race riots. Those familiar with the areas around Roswell and Marietta will get a peek into the landmarks, families and events of both early and later 20th century. One thing many histories and memoirs fail to cover is how everyday and, yes, dirt poor people lived. This book takes on topics such as bootleggers, domestic abuse, bullying, family dynamics, financial struggles, mental illness, racism, and abandonment. But it’s not entirely negative – it’s introspective and profound, especially for BLACK MOUNTAIN readers who discover how certain characters came to be.

Although reading the BLACK MOUNTAIN series would heighten the enjoyment of the memoir, ROLL THE STONE AWAY can be read as a standalone for those who enjoy non-fiction and local history. The book can be purchased online in paper or eBook, or a signed copy can be purchased at a local bookstore. For PCHS members, there is a copy in our free lending library!