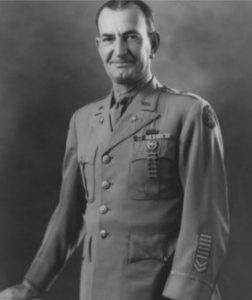 “Brigadier General Kendall “Wooch” Jordan Fielder (August 1, 1893 – April 13, 1981) was an influential World War II veteran, who settled in Hawaii, and testified before Congress in favor of statehood. At the time of the attack on Pearl Harbor, then Lieutenant Colonel Fielder was the U.S. Army G-2 Chief of Intelligence and Security, under Col. Walter C. Phillips.

Fielder was a native of Cedartown, Georgia, and played football at Georgia Tech under coach John Heisman; graduating in 1916 with a degree in textile engineering. After graduation, Fielder was commissioned a Second Lieutenant in the U.S. Army.”

History might have been very different were it not for Fielder and other champions of the Japanese American people in Hawaii. While Wooch was often given credit for saving their “bacon,” he was quick to say he was only one of many people who played a part in preventing mass internment on the islands and in forming the fabled VVV, 100th Battalion and 442nd Regimental Combat Team. On April 13, 1981, Fielder passed away. His obituary in the Honolulu Star-Bulletin on the 16th perhaps said it best: “Omar Bradley, who died last week, was called the “GI general of World War II. “Wooch” Fielder might equally be called “Hawaii’s colonel.”