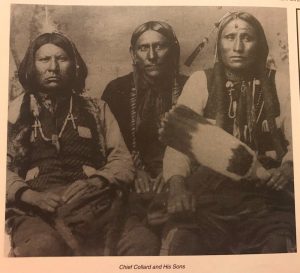 Chief Collard lived peacefully in Cedar Town among white settlers until the Cherokee Indians were rounded up and driven from northwest Georgia in 1838. Later Collard and his sons apparently posed for a photographer in their new Oklahoma home. He and one son wear Christian crosses on their necklaces, possibly indicating conversion by missionaries who had been working the territory since 1801. After the Civil War, the sons visited Whatley’s daughter, Martha Cordelia Whatley Whitehead, and presented her with their photograph. This rare image of three Cherokees from Cedar Valley was handed down in the family to Miss Annie Jane Zuker of Rockmart, W.O.B. Whatley’s great-granddaughter.

Valuations were made of Indian improvements to compensate them when they were force-marched west on the Trail of Tears. The valuation for Collard was made by two agents, Shaw and McMillan, who noted that their visit to Collard had been pointed out by L. H. Walthall who guided the agents to Indians whose improvements had been omitted the previous year.

An 1837 document for Collard (with his signature marked with an “X”) shows that he had been dispossessed of seven acres the previous year, probably his farm next to the W.O.B. Whatley in Collard Valley. After that loss, he relocated to Cedar Creek and cleared another farm described in the valuation, only to be drive off again by federal troops.