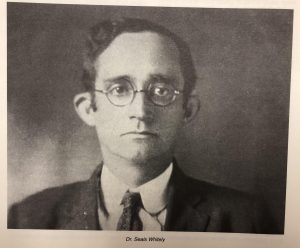 Dr. Whitely was born in Rome, GA, in 1880, the son of Charles Hiram Whitely and Mary Joseph Downer Whitely. When he was six years old, he and his family moved to Cedartown. He received a masters degree in pharmacy in 1904. Two years later, he graduated from Tulane University Medical School.

In 1912, he took a post graduate course at the Post Graduate College in New York. He spent two months at the Bellvue Hospital in New York City practicing surgery on cadavers in the morgue.

On July 8, 1914, Dr. Whitely married Miss Irene Dempsey, daughter of J. D. Dempsey, a well-known contractor in Cedartown. To this union, six children were born. In 1922, he built Cedartown’s first hospital holding ten beds and located on Main Street behind the courthouse.