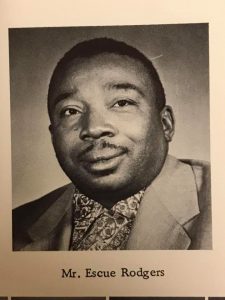 Escue Rodgers, born in Piedmont, Alabama, came to Cedartown in 1945 to teach math and to coach football and basketball. He was athletic director at Cedar Hill High School from 1945 through 1969. During his 24-year tenure at that school, Coach Rodgers had a record of 85 trophies in football, basketball, and track. Rodgers also taught mathematics. He attended elementary school in Piedmont, Alabama, and graduated from Booker T. Washington and Morris Brown College in Atlanta. He completed additional studies in math and physical education at West Georgia College, North Carolina College at Durham, Florida A & M University, New York University, and the University of Illinois at Urbana.

Rodgers was selected head coach for the North Team of the first G.I.A. All-Star Football Game in Macon in 1950. In 1953, he was awarded the Fort Valley State College Coach of the Year Award. In 1956, he was awarded the Morris Brown College Outstanding Coach Achievement Award. Rodgers was also a coach for the East West G.I.A. All-Star Football Game in 1962. In 1974, Rodgers received the Distinguished Coaching Award from the Georgia Athletic Coaches Association.

Rodgers, believing in academic achievement, was concerned about improving education to compete for jobs and college eligibility requirements. In 1968, Escue Rodgers received a plaque from the Georgia Teachers and Educators Association for promoting quality educational endeavors. He served on several local and state committees. Escue Rodgers died in 1978 from lung cancer. In 1996, the Cedartown Memorial Stadium Committee inducted his name on the Wall of Honor at the stadium in recognition of outstanding leadership, athletic achievement, and community contribution.

Alice L. White Rodgers came to Cedartown, Georgia, in 1949 to teach English, history, literature, and to direct choral activities at the Cedar Hill High School. “I was born in Chattanooga, Tennessee, and educated in the public schools of Chattanooga. My musical training was received at the Cadek Conservatory of Music in Chattanooga, and I received a Bachelor of Arts Degree in Music from Knoxville College in Knoxville, Tennessee.” For twenty years, Alice White Rodgers directed the choral activities at Cedar Hill. During this time the Cedar Hill Chorus was awarded the ratings of excellent and superior many times at the Georgia Interscholastic Association Music Festivals. Alice Rodgers was married to Escue Rodgers and taught in the Cedartown and Cave Spring areas for 34 years.

Escue Rodgers was inducted into the Georgia Sports Hall of Fame in 2021 (news article).