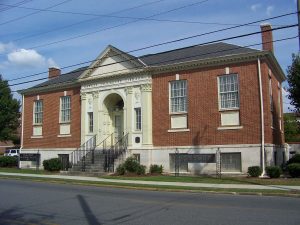 The building was designed by noted Georgia architect Neel Reid. Erected in 1921, it was originally the Hawkes Children’s Library. A grant from the state provided extensive renovations and made the building an ideal site for a museum. In 1980 the building was placed on the National register of Historic Places, the first structure in Polk County to receive this honor. The Society desires to preserve the building and maintain a genealogical research library therein.

Of special interest is the Palladian window, a Neel Reid hallmark. The lower floor includes storage and exhibit space, a kitchen and a meeting room with seating for 100 people. The museum was opened formally in September of 1978 with an interesting display of artifacts from this area. Each year the collection of photographs, newspapers, documents, and artifacts has grown, and gifts to the museum are still being accepted.

The museum reopened on January 7, 2009 after a three-month hiatus during which the museum was painted, crumbling plaster was repaired, and the 87-year-old building was fitted with storm windows. This work was made possible by the Georgia Department of Natural Resources Historic Preservation Division, the City of Cedartown and the skill and scrupulous attention to antiquity restoration performed by Eddie Hilburn and Polk Painters.

The museum features an attractive Cherokee Indian exhibit on loan from Jerry Stroup; a homemade still confiscated from an abandoned warehouse by the local police; a display of local celebrities including Sterling Holloway who was the voice of Winnie The Pooh; and, a pictorial history of the Murphy Harpst Children’s Centers.

Selections from the museum’s most popular temporary exhibits are also on display: the Boy Scouts in Cedartown; the Armed Forces Exhibits; the Goodyear Mill, 1926-1982; the Cedartown High School Band, as well as, images of Cedartown’s classic Main Street from the early twentieth century.

A Restored Fountain for the Garden 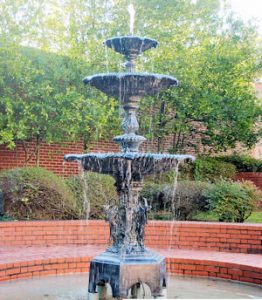 The fountain, that you see here, stood for over 50 years on the courthouse lawn. It had been moved to Peek Forest Park (at the request of the Daffodil Garden Club) when the new courthouse was built in the early 1950’s. There it stood for many years, but it was falling into disrepair.

Following the establishment of the Society in 1974 and acquisition of the Museum, several members led by Ella Bruner began discussing the use of a vacant lot behind the Museum for a garden. That lot owned by the city was added to the Society’s lease. Jane Wyatt suggested Dan Franklin, a landscape architect, whom she knew, look at the property and suggest a plan.

The fountain was one of several civic features shown to Franklin. He felt, and society members agreed, that this fountain could serve as a focal point for the garden. Once more, the City Commission was approached and asked if they would move the fountain to the center of the hoped-for garden. They agreed to do this. The Daffodil Garden Club was then asked for their permission to move the fountain, which was granted.

By 2009 the garden and especially the fountain needed a face-lift. An adhoc Garden Committee was appointed to make recommendations and they decided to first focus on the repair and restoration of the fountain.

The job was done by Robinson Iron Works, the Alabama specialty firm that maintains the famous Savannah fountains, and others throughout the country. Understandably, to conserve water, it won’t be in operation all the time; it now has a recirculating system.

The restored fountain was reinstalled in the Garden in time for the Society’s annual picnic, June 2009. Water gracefully spurted from the top, filled all three bowls to overflowing, filled the pool and recycled! As Society President Tom Lowe commented in the Fall 2009 Newsletter, “If you haven’t already done so, be sure to drop by the garden and check out the fountain and the craftsmanship that went into the restoration: outstanding