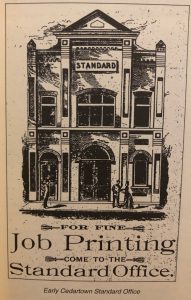 Cedartown and Polk County’s first newspaper was the Record, established in 1869 by W.S.D. Wikle, who acted as editor and publisher for a number of years.

A few years later, Thomas Gibson established the Express and published it until he entered the North Georgia Conference of the Methodist Church to become a presiding elder.

The Advertiser was founded by Dr. William Bradford, who published it for a while after the demise of the Express, and later consolidated with the Record.

In 1889 a locally organized stock company founded the Cedartown Standard, and that same year the Standard was consolidated with the Advertiser. For a short while, James E. Houseal, then Superintendent of the schools, edited the Standard, and he was succeeded for a short period by Mr. Langworthy.

Late in the year 1889, E.B. Russell and W.S. Coleman, both Ohioans, came to Cedartown and bought the Standard from the stock company. They operated the paper continuously from 1889 to 1912, when Russell purchased the Coleman interests and continued the editorship uninterrupted until his death in June, 1930.

In July, 1930, Mrs. E.B. Russell sold the newspaper to John H. Jones, then and later editor of the newspaper at Fort Valley. In October, 1930, Jones sold his Cedartown interests to Roy N. Emmett and associates. The Standard was published under corporate ownership for two years, at the end of which Emmett became individual owner, upon surrender of the corporate charter. Mr. and Mrs. Roy Emmett edited and published the paper from that point until the spring of 1950.

The newspaper was published as part of the Walls Newspaper chain. The Standard was edited by James E. McDonald after it was sold by the Emmetts in 1950.

The newspaper was published as one of Georgia’s largest weekly papers until 1938, the Standard then became a semiweekly, and on April 29, 1946, it was expanded to a five-day-a-week daily, with a weekly edition. The weekly edition was suspended in the 1950s.

The Standard was purchased in 1988 by News Publishing Co. of Rome. B.H. Mooney III is the publisher. The newspaper was edited by David Royal until 1992 when Jim Penney was named editor.

For the most part of its history, the Standard has been published as a twice weekly or weekly newspaper. Most of its predecessors were published as weekly papers.

Currently, as it has been for many years, the newspaper is published on Tuesdays and Thursdays. The publication has several special editions each year, the most popular being its Graduation Edition published in June.

The newspaper, also publishes a Progress Edition each year that forecasts and reviews the commercial and industrial expansions in the area. It also examines progress in other areas, such as government services, education, recreations and religious activities.

In August, the Standard publishes a special Past Times Edition, a publication that is a joint effort of all the News Publishing Co. Newspapers.

A football tabloid is also published in August with primary emphasis on Polk County High Schools, Cedartown and Rockmart.

Each April, the Standard publishes a Home Improvement tabloid.

Research Library has no admission fee, but donations are appreciated and research help is available for an hourly fee.