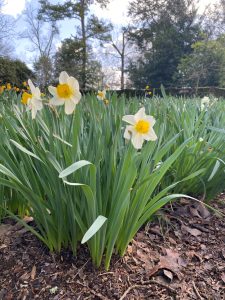 Several names for the club were discussed; Daffodil was chosen on 10/4/34. By 11/34 membership was up to the limit set by the club. In November, members had a copy of bylaws. The club was well on its way to helping to beautify Cedartown. Mrs. Wyatt and Mrs. Litesey were the first joint hostesses for the new club in October, 1934 followed by Mrs. Bruner in November, 1934. Dues for the remaining portion of this first year were set a 25 cents.

In December 1, 1934 Mrs. Bruner presented the club house project. The plan was for numerous civic organizations to go in together and build a club house “hopefully placed at the park.” The Cedartown Federated club was instrumental in constructing, furnishing, and landscaping our building. In July 1936 we held a benefit bridge to help buy club house furniture. In 1937 we first met in the new clubhouse. We planted the grounds of the clubhouse. At first members met monthly in homes but now meet in the Women’s club building. Financing this project was hard on club members in these depression years; many types of “fund raisers” were held. On July 11, 1939 Mrs. Trippe announced that “the last payment on the club house has been paid.” On October 3, 1939, Mrs. Wyatt, Chairman of the Executive Board, reported that the new piano had been installed in the club house and enough pledges had been secured to pay for it. The Daffodil Garden Club began with 12 charter members; three today continue to be very active. There is a clause in the club constitution limiting membership; over the years the number has grown to 30, 40, and now 50 members. Mrs. Georgia Wyatt was the first club president; she served again in 1953-54.

Members were asked to bring notebook and pencil to each meeting to take notes on “study chapters.” Monthly arrangements were made and ribbons were given. Arrangements were analyzed. At the end of the year a test was give concerning materials studied in the club. Some of the first flower shows were held with the Cedar Valley Garden Club. Later shows were held in homes. As soon as members had enough horticulture of their own and in the park we have had our own flower show since that time. In 1938 members contributed to memorial gardens in Athens. Members secured subscriptions to Holland’s magazine as a fund raiser; the club made $10.80. 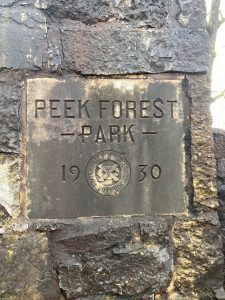 When the club was organized in 1934, it chose Peek’s Park as their main project and it continues so until today. The land for the park was a gift to the city from the late Captain Julius A. Peek, The presentation of this park was made to the city by the family in 1924. The Kiwanis Club sponsored the building of the swimming pool in the park. The Exchange Club built the South rock entrance on College Street. Playground equipment was either bought by the city or Kiwanis Club or provided by local businesses. In 1946 the club donated the plaque that is installed in the gates as a memorial to Captain Peek. Mrs. Harold Wyatt and Mrs. W. G. Bruner served on this civic committee. Between 1935 and 1937, 250 dogwood trees were placed throughout the park. In 1964 the club worked on the boxwoods at Peek Forest Park. Early on in 1938 a committee was appointed to investigate the price of daffodil bulbs–the bulbs to be planted in Peek Forest Park. Some members gave bulbs for the park. Mrs. Curry Porter gave 100; bulbs were both tulips and daffodils. Mrs. Russell reported in October, 1940 that the city engineer, Mr. Norton, would make a blue print of the project. 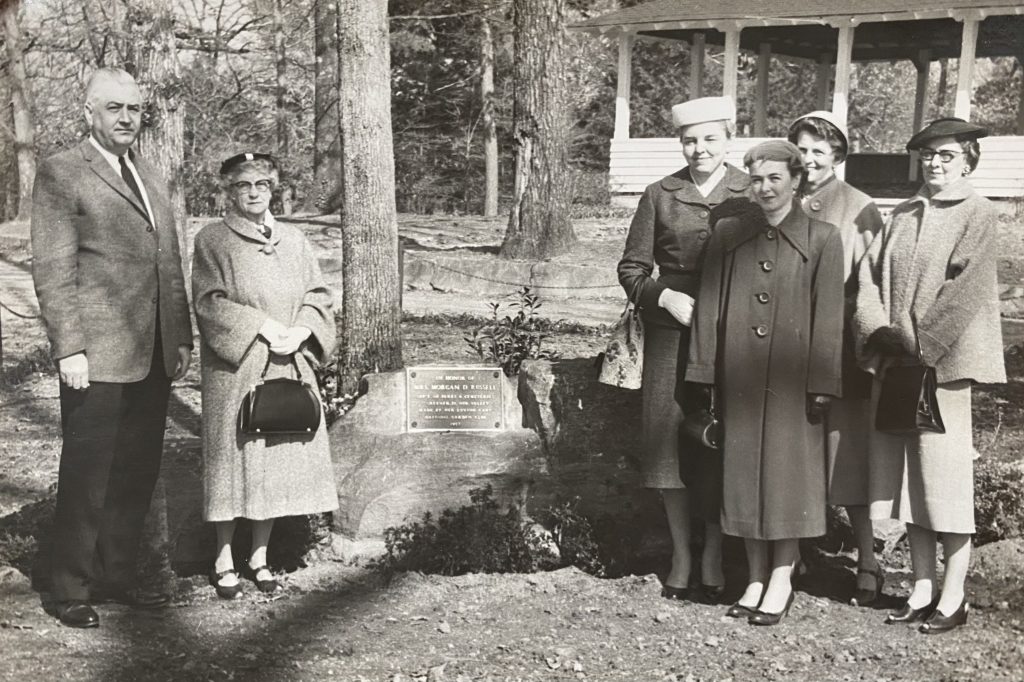 Date of affiliation with the Garden Club of Georgia: 1936 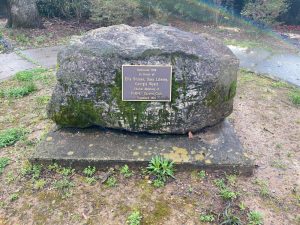 Resume of Accomplishments:
Sponsored by the Laurel Garden Club of Marietta and the Cedar Valley Garden Club of Cedartown, the Daffodil Garden Club, under the able guidance of Mrs. Gordon Brewster (then president of the Cedar Valley Club), Miss Kate Young, Mrs. Robert Campbell, Mrs. M. D. Russell and Mrs. Frank Howard, was organized September 27, 1934. The group adopted for its aim the beautifying of home and town surroundings. During the first organizational year the club urged local service station operators to plant attractive flower beds at their places of business and gave a prize to the one who showed greatest improvement. 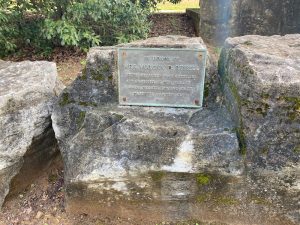 During 1935 and 1936 our members took an active part in the construction of the indescribably beautiful Woman’s Building. Not only did we join the Cedar Valley Club in planning the surrounding grounds but we helped to buy equipment and furnishings, including a Steinway grand piano.

Through the years it has been a privilege to contribute to the Red Cross as well as the Community Chest. For several Christmas seasons baskets were given to needy families.

The major project of the Daffodil Garden Club has been the enhancing of the natural beauty of Peek Forest Park. We began our beautification by naturalizing daffodils throughout the park. Then we planted spirea around the horseshoe curve. Year by year we have added to the general scene dogwood, redbud, crabapple trees, iris, roses, daffodils, tulips, boxwood, nandina bushes and plantings of other shrubs which remain green through all the seasons. The formal garden plot in the park was designed by our honorary member and devoted friend Mrs. Robert Campbell. Both she and Mrs. M. D. Russell have been particularly helpful and generous in all our civic projects. City officials have been extremely cooperative and have expressed gratitude for our extended and 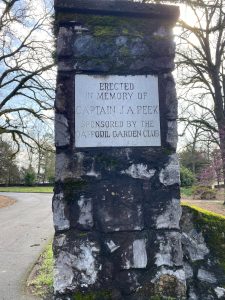 well-planned program for the beautification of the park, the land of which was a gift to the city from the late Captain Jule Peek. At the College Street entrance, directly opposite the home of Captain Peek’s daughter, Mrs. W. W. Chapman, we sponsored the erection of a handsome memorial plaque to pay lasting honor to Captain Peek. The club has voted to place similar gates at the Jule Peek Avenue entrance to the park. Money for that purpose is now on hand.

It has been a feature of the Daffodil Garden Club for many years to have a daffodil show each spring. We were the second garden club in the state to hold such a meeting. Every year our members purchase and grow additional varieties of daffodils, and to date we have planted thousands in Peek Forest Park.

During the years of WWII we kept colorful flower arrangements in the U. S. O. club rooms, we purchased war bonds, and we donated radios, card tables and magazines to Battey General Hospital in Rome.

Our club has contributed to the Athens Memorial Garden fund as well as to that of the National Council of State Garden Clubs for educational endowments.

Two delegates, and usually several other Daffodil members, have attended the State Garden Club Convention each year. Our scrapbook has won state prizes on two occasions. 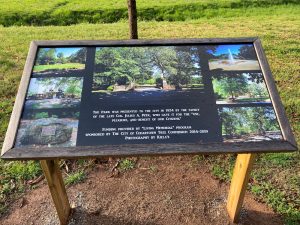 We take great pride in the fact that several times each year we have presented distinguished guest speakers who have inspired us to higher cultural and artistic achievements.

In every accessible school of flower arranging and flower show judging our membership has been well represented. Each year our monthly programs have show increased interest in the pleasing arrangement of flowers and added emphasis on horticulture. Our efforts, combined with those of the Cedar Valley Club, in supplying flower arrangements for the opening of the Polk General Hospital on June 22, 1947 were evidence of these facts.

In October of 1947 Mrs. Harold Wyatt and Mrs. W. G. Bruner were representatives of our club at the organizational meeting of the Noweta Garden Club which was sponsored jointly by the Daffodil Club and the Cedar Valley Club. The Noweta charter members numbered thirty-six. It was our pleasure to have them as our special guests at an elaborate Christmas tea last December. We have gladly offered every possible assistance in planning and executing their initial program.