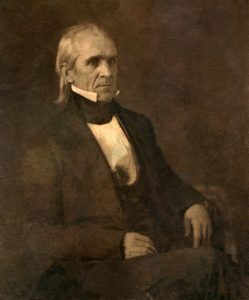 Very little attention is given it seems to James Knox Polk, 11th President of the United States, and the man for whom Polk County, Georgia is named. Maybe it was because of the manner in which he graciously performed his duties. One historian said of him: “He was the least conspicuous man who had ever been nominated for President.”

Actually, the achievements James K. Polk made during his short lifetime are quite large compared to many who served the nation’s highest office. He was born in Mecklenburg County, North Carolina on November 2, 1795, a descendant of Scots-Irish who settled in Mecklenburg County. Polk’s father was a farmer and considered a man of moderate means, so Polk did not have the advantages many had at the time. Nonetheless, he was bright and made friends easily. In 1806 he moved to Columbia, Tennessee with his parents. In 1818 he graduated from the University of North Carolina at Chapel Hill at the head of his class. He was admitted to the bar in 1820 and began practicing law in Columbia, Tennessee. Between 1823 and 1825 he served as a state legislator in Tennessee and during this period found time to marry Sarah Childress on January 1, 1824. They produced no children. He was Speaker of the House of the United States House of Representatives from 1825 to 1839. During his fourteen years of service in Congress he is reported to have served “without missing a sitting except for one day when he was confined to his bed by illness.”

After being in Congress for many years, Polk felt the call to return to state politics and in 1839 he served as Governor of Tennessee. He was defeated for re-election in 1841. In 1844 Polk received the Democratic nomination at the Baltimore Convention for President on the ninth ballot and went on to win the election over Henry Clay, the great Whig leader of that time.

He served as the 11th President of the United States from 1845-1849. He did not seek re-election. James Buchanan, Secretary of State; Robert J. Walker, Secretary of Treasury; William L. Marcy, Secretary of War; and George Bancroft, Secretary of the Navy were some of the outstanding men to serve in Polk’s cabinet while he was President.

Polk’s ability to get things done while President made him a very successful President. He was popular because he kept his campaign promises. He was able to reduce tariffs and form an independent treasury in the government. During his term Oregon was first occupied, Texas was annexed, and a war was started and won with Mexico in order to acquire the California Territory.

Later in his presidency the Whig Party accused him of forcing slavery on the western states. This added to the country’s sectionalism many felt, and it was a problem that would not be solved until the Civil War.

Since James K. Polk died in 1849, very soon out of office and only two years before Polk County, Georgia came into being there was obviously a lot of sentiment toward Polk at the time. He had served his country well, he was a southerner, and he had grown up in a rural setting, all items that probably persuaded Georgia legislatures to choose his name for a new county, Polk County, Georgia.