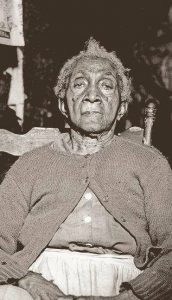 Some years ago, two young fellows from Cedartown traveled the few miles to nearby Collard Valley to pay one of their customary visits to “Aunt Nanny,” as they called her. Wayne Gammon and Mark Cornelius were both descendants of W.O.B. Whatley, their great-grandfather. Mr. Whatley, an early settler in the area had once owned the slave, Nanny Whatley.

At the time of the visit by Mr. Gammon and Mr. Cornelius, Aunt Nanny was already well over one hundred years of age. The Whatley family members, both black and white and generations removed, had strong bonds.

Wayne Gammon remembers a remark Aunt Nanny usually made: “We is you’ folks.”

Besides the Whatley family members, other Cedartown folks made occasional trips to Collard Valley to visit the elderly lady and to help with her needs which were usually simple enough.

Nanny was born a slave on July 15, 1838, and grew up on the King plantation in Floyd County with two brothers, Guy and Tobie.

Nanny said she remembered her mother only as being named “Harriet.” Her father, according to Nanny’s recollections, had arrived in this country by ship, although she did not know where he was born.

When Nanny was twenty, she said she met Mike Whatley, a slave owned by W.O.B. Whatley. The two were allowed to marry, probably after arranging for the sale or trade of the young girl to the Whatleys.

After the U.S. Civil War, the couple gained their freedom but chose to stay with the family who apparently had treated them as family members. While living on the Whatley place, Nanny and Mike had two children, Harriet and Obie. Obie was named after W.O.B. Whatley.

While she was alive, Nanny had vivid memories of the many historic and dramatic events she had witnessed over her lifetime. Some of her sharpest memories were of the Civil War when Union troops swept into Cedartown, burning the city.

During her lifetime, twenty-seven presidents of the U.S., from Martin Van Buren to Dwight Eisenhower, would hold office. As word spread of the newfangled invention called the automobile, Nanny said she refused to believe such stories. Within a short time, however, she saw for herself the first car driving up Collard Valley.

Airplanes were even more unbelievable to Nanny. When the first one she had ever seen flew over, she said, “I just stood there and watched it go out of sight.” She had never imagined anything like it.

In 1922, Nanny’s husband, Mike, died. As a widow, Nanny remained in her little cabin, tending her garden, content to spend her remaining years right there.

Surprisingly, however, her health remained good right through her advanced years. She bought glasses, but didn’t wear them. Her hearing was exceptional for a person of her age. Her only complaint has been her “aching bones.”

As the years passed, Nanny Whatley became more and more proud of her age. Anyone talking to her in her later years was almost certain to ask her to what she attributed her long life. Her answer was simple: a strong faith in the Lord. She also said that she “worked hard, lived right, don’t hate nobody, don’t envy nobody, and the man upstairs just lets me live.”

Although when she was younger she “used to take a dram now and then,” she attributed no miraculous qualities to whiskey. However, even in her later years, she was known to ask Fields Whatley on one of his frequent visits, “Could you get me some good corn whiskey to sip to help my aching bones.” Fields recounts those requests in his book, The Families of Whatley.

On a later visit when Fields took a pint out to Nanny, she thanked him and made one further request. “Massa Fields, don’t give any to my baby. He’ll just get drunk.” The remark amused Fields to no end, because Obie, her “baby,” was 86 years old at the time.

“Aunt Nanny” Whatley continued her admirable ways for many years. Finally, on March 8, 1958 the good Lord called Nanny home. She died at the age of 119 years, seven months, and 21 days.

Written by Gordon Sargent and submitted to PCHS for the 2000 publishing, The Heritage of Polk County, Georgia. 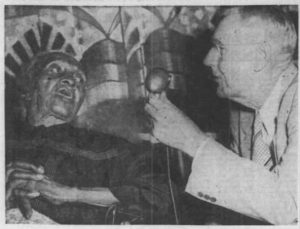 Cedartown–A little woman put on a black dress and clean apron to make her first trip to town in 12 years. She lived on the old Whitehead place in Collard Valley, about four miles away. She could not read nor write.

She was coming to see her first moving picture, her first radio microphone and her first flash bulb.
“Y’all quit doin’ that to me,” she said as Photographer Hugh Stovall snapped a picture. She also backed away a bit before speaking into the mike.

It was her 111th birthday Friday and the people of Cedartown were paying tribute in one of its “most honorable citizens” — “Aunt Nanny” Whatley, an ex-slave who has lived through the administrations of 26 of the 33 U.S. Presidents.

Born July 15, 1838, in Floyd, she moved to her present homeplace “just before the war” (War Between the States), and she’s still living in the same house given to her in 1865 by her former master, O. B. Whatley.

After the novelty of flash bulbs and microphones, Aunt Nanny appeared calm as a veteran actor on the stage of a local theater as a group of leading businessmen presented her a birthday cake with 111 candles and brought in a wheelbarrow loaded with gifts from local merchants and friends.

Beside her was A. J. Whitehead, a grandson of Whatley, who was there to attest to Nanny’s age through records in the family Bible.

Whitehead told the audience that his former nurse “lived as a faithful servant who had never been in court and has always paid her debts.” (She mortgaged part of her 40-acre property on the plantation several years ago to help a son, but her home and an acre of land will be hers until death.)

W. D. Trippe, President of the Commercial National Bank and master of ceremonies at the party, declared, “I have not known a more honorable citizen, and I’m sure that she has done all in her power toward the development of the town and county.”

Whatley, who is not related to “Aunt Nanny’s white kinfolk,” dreamed up the party when he found out she had never seen a “movie.”

But after the party, two other former residents of the “ol’ plantation,” Mrs. M. M. Cornelius, Sr. and Mrs. A. J. Whitehead came backstage to greet her. And Aunt Nanny replied to an invitation to see her first movie: