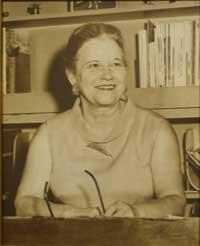 Sara Hightower, the helpful and smiling “little lady,” pioneered library science in Floyd and Polk counties. She is acknowledged to have ushered in a new era when she devised the concept of the bookmobile in the late 1940s. From that effort, which saw trucks carting books to gas stations, rural stores, and farmers’ homes, grew the library system which now bears her name: The Sara Hightower Regional Library. The regional system includes four libraries: Cedartown, Rockmart, Cave Spring, and the Rome-Floyd County Library, which also serves as the system’s headquarters.

Miss Hightower devoted more than 50 years to public education. She was born in Cedartown in 1911 and began working as an elementary school teacher during the Great Depression.

After obtaining a master’s degree in library science, she was appointed librarian of the Pepperell Schools in 1941, where she remained until 1973.

Along with the bookmobile, Miss Hightower pioneered the inauguration of libraries into elementary schools. Before she began a campaign to bring formal book collections to young children, schools merely provided a few books in the back of the classrooms. The state provided no funds for book purchases. Elementary school libraries owe its existence to her efforts.

Miss Hightower’s charm and commitment helped her to gain statewide influence, which in turn helped orchestrate a massive filtration of books into the library system. One librarian said, “She really had influence statewide. She had vision and knew what needed to be done. She was so gracious and always such a lady. She had the ability to inspire confidence.”

In 1969, Miss Hightower was honored with the highest award for library science in Georgia: the Nix-Jones Award for distinguished Georgia Librarianship. She also served as president of the Georgia Library Association in the 1950s.

Miss Hightower was a member and former elder of the First Presbyterian Church of Cedartown, and also was a member of the Daffodil Club. She died in 1980.

The Heritage of Polk County, Georgia: 1851-2000
Submitted by Gordon D. Sargent
Sargent’s large donation of research material is available in our research library.