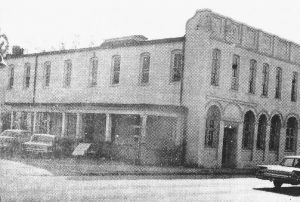 “The Right House, described as a home-like hotel, had a good reputation and excellent facilities. The hotel was established in 1890 and located on the corner of Main and Gibson Streets, making it accessible to Cedartown’s Main Street but on the south end.” Polk County, Georgia: The First One Hundred Years by Larry D. Carter

First building in the county with an elevator.