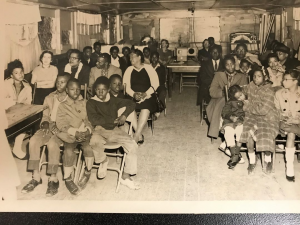 “The Regal Civic and Federated Club had various civic venues in Cedartown. It was founded by Louise Hicklen, Henrietta Hood, and Gladys Atwater. They had a civic center, issues scholarships, and had a building in the Potash community. This picture (left) shows them sponsoring a film and probably a speaker. The photo is dated March 3, 1959.

They also had a popular reading and tutorial program. That’s where the library came into play. 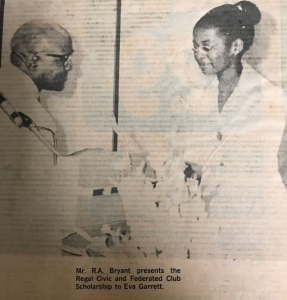 This is a picture (right) of my sister, Eva Garrett, receiving the Regal Civic and Federated Club Scholarship from Mr. R. A. Bryant who was on the board of directors for the organization. He was also the former principal of Cedar Hill High. (1974)” Information submitted by Dr. Sherri Garrett

ROPER FAMILY HISTORY from The Heritage of Polk County, Georgia tells the story of how the Regal Civic Club was founded. This article was submitted by Gladys Atwater in 2000.

The Roper family history dates back to the 1800’s in Georgia and Alabama. John (1851-1916) and Laura Wilson Roper (1853-1928) whose parents were of Creek, Cherokee and African-American descent were the parents of two sons, James (1892-1950) and John Henry (1894-1949). John Henry (known as Henry) was born in the community of “Peppertown” on Irwin Street in Cedartown, Polk County, Georgia. He was born and raised in the home where his father was raised. Henry, his wife Elizabeth (Lizzie) Battle Roper (1897-1971) and their eldest daughter, Louise and her husband Ishmael Hicklin (retired army veteran) lived there until Henry died. Lizzie also lived in this house until she died.

Lizzie’s parents, Nelson (1850-1936) and Dicey Richardson Battle (1863-1941) lived in the community of “Battletown” (Johnson Lake and Berry roads) named for Nelson’s slave master Ezzard Battle. Their fifteen children were reared in this community. Lizzie was their seventh child. Henry and Lizzie had five children, namely Louise, Henrietta, Gladys, Thomas and James, all of whom were reared in the family home in Peppertown. Louise and Ishmael had no children but truly loved helping other people’s children. Henrietta and husband Henry T. Hood, Jr.’s only son Oliver Kenneth had one child named Kenneth James. Three sons born to Gladys and husband Johnny B. Atwater were Johnny Delano, Wendell Louis and Henry Michael. Gladys and Johnny’s grandchildren were Andrea, Erika Gladys, Michael and Frances Elizabeth. Great-grandchildren are Jasmine Simone, Kayana and Aubrey. Thomas had no children. James’ two sons , Randall Vernard and James Edward moved to Columbus, Ohio after graduating from Cedartown High School. Beloved children, cousins reared by Gladys, Henrietta and their husbands are Cynthia, Andrew and Lori Christy.

Cousin Henry, Cousin Lizzie, Mama Lizzie, Ma Roper as they were affectionately called had less than a high school education but believed in the value of education and made sure their five children were educated. All five children attended college. The colleges attended were Spelman, Albany State, Morris Brown, Fort Valley State, Pace Business College (New York), Atlanta University and Peabody (Nashville). Louise, Henrietta, and Gladys taught school in the Polk School District until their retirement. James worked in various jobs including factories, sales, insurance, and interstate trucking. Henry worked as a cook on the Central of Georgia Railroad running from Cedartown to Chattanooga for many years. Later he worked on the highway that was being constructed from Cedartown to Rome. When construction was completed Henry worked on the WPA until his health failed. Lizzie worked in her home taking in washing and ironing and taking care of her five children. She was liked by old and young alike and the children would pick bouquets of flowers to bring to Mama Lizzie. She appreciate these kind deeds so much that when arthritis impaired her and she could not move around, she would call the children to her so that she could read to them and tell them stories.

The reading and story telling became such a big part of Lizzie’s life that she and Louise established an after school reading program in their home. This program grew so that soon a building which Mrs. Roper owned (called the Regal) was used to accommodate it. In 1955 Lizzie and her children organized the Regal Civic Club. The family along with the community leaders, churches and people from all walks of life both on the state and local level working together chartered and incorporated the Regal Civic and Federated Clubs, Inc.

Louise, being very energetic, enthusiastic and with a zest for education, knowledge and the betterment of all people, had a vision of the many things that could be done to improve the community for everyone. Following this vision, she and Ishmael began the task, working tirelessly to accomplish these goals. Her goal was to enhance life in the community especially for poor and underprivileged families. Louise was the recipient of many awards, honors and pursuits. She was responsible for Regal Scholarships for deserving students (1955), college loans for aspiring graduates (1956), and the Regal Public Library in the old Cedar Hill High School building (1960) on Cedar Hill Street (now Martin Luther King Blvd.) In 1961 Louise established a federally operated Day Care Center in the old Regal building and in 1965 she founded Headstart in Polk and south Floyd counties. The “Save the Children” charity, brought to Polk County by Louise and sponsored by the Regal Club, benefitted many children in Cedartown, Rockmart, and Cave Soring. In 1976 the Roper family donated land on which a new Day Care Center was erected. Star Industries built the building and Hon Industries, churches, local governments and individuals contributed in many ways to complete the building and its furnishings.

Louise founded an Intergenerational Reading and Tutorial program held near Cave Spring, Friendship, Ware’s Grove Baptist churches in Cedartown and Cosmopolitan Methodist Church in Cave Spring, GA (south Floyd County) in 1986 that was sponsored by the Regal Clubs until 1995. She donated land to her church home (Cedar Spring) in 1994 on which the Hicklen Life Center is to be erected. The Philpot Spring Subdivision Development Corporation owned by Mrs. Hicklen and some others is still a vital part of Cedartown.