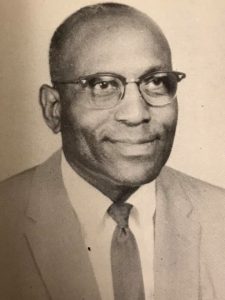 One of Cedartown’s most valued and respected citizens is Robert Anderson Bryant, principal of Cedar Hill High School from 1940 until his recent retirement. Few can match his dedicated service and his contribution to our total community.

During the administration of Mr. Bryant, Cedar Hill High School grew in size and in the scope and quality of its curriculum. A new building was constructed to serve the needs of black students in the western part of the county. Mr. Bryant led the faculty in doing a self study of the school and Cedar Hill High was the first black high school in Georgia to invite a visiting committee of educators to evaluate the school’s program and make recommendations for its improvement. These two activities resulted in the school’s being accredited by the Southern Association of Schools and Colleges.

The school continued to improve through an “In Service” program for the faculty and the cooperation of the PTA and the student body.

One of the primary goals of Cedar Hill High was the total development of its students. Its football team became well known throughout the state as a constant winner. Other extracurricular activities were available to the students.

R. A. Bryant has been an effective community leader, serving in many capacities through the years. He spearheaded the building of a new church, served as Superintendent of the Sunday School, Treasurer of the Church, Trustee and a member of the Board of Stewards. He was chairman of many community financial drives. He has long been actively involved with the Sarah Murphy Home, and is Chairman of the Board of Directors.

With others, Mr. Bryant led the way in upgrading the quality of homes in the black community. His and Mrs. Bryant’s beautiful, gracious home was one of the first to be built in an area in the South part of town.

His enviable reputation as an educator led to Mr. Bryant’s being invited to join the Atlanta University faculty during the summer sessions. He has held office in important state committees and organizations pertaining to education. He is presently serving as chairman of the Northwest Georgia Council of the Boy Scouts of America. He has been Director of District Seven of the Georgia Retired Teachers Association and is now assistant to the state director of the National Retired Teachers’ Association. He is also president elect of the Polk County Mental Health Association.

Hampton Institute, Mr. Bryant’s Alma Mater, recently honored him with a special award, presented at a dinner meeting of the National Hampton Alumni Association held at the Read House Hotel in Chattanooga. The toastmaster cited him as “An outstanding educator, community leader, dedicated churchman, and superior individual”. To these we add humanitarian because Robert Anderson Bryant has devoted his adult life to promoting human welfare and social reform. Cedartown recognizes his worth and appreciates his efforts on behalf of our town and our citizens.