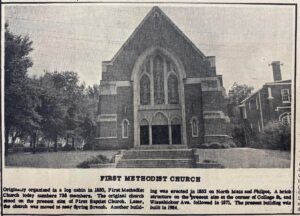 In 1849 when Daniel C. Roberts came to “Cedar Town” from North Carolina there was not an organized Methodist Church here. He, with his wife’s sister, together with Professor Ben Mosely and his wife, met in a small log storehouse and formulated plans for the organization of a Methodist Church.

The Cedartown Methodist Church was organized in 1850 in this same log house which served as the meeting house, the first meeting house. It stood near the corner of what is now College Street and Wissahickon Avenue, where later Mr. Will Trawick’s residence was located and where now stands the First Baptist Church.

Constituting the original membership were the following: Mr. and Mrs. Daniel Roberts, Miss Mary Witcher, Professor and Mrs. Ben Mosely, Miss Annie Byrd, Rev. Elija Byrd, S.M.H. Byrd, and Mrs. Odessa Byrd. They secured a minister, and had services once a month at the old Moseley School House on the Cave Spring Road, about a mile and a quarter from town.

Later Asa Prior donated some land and logs to build a church on Spring Branch near where the Blue Spring is located. This house was used for a school house during the week and for a house of worship on Saturday and Sunday. Before a great while the accommodations of this building were inadequate, for by this time a number of families had moved into this community, namely: The Wimberlys, Websters, Charles Woods, and Peeks.

In about the year 1852 these devout citizens merged with the earlier membership into the Methodist Episcopal Church and built a meeting house on an acre of land situated on what is now North Main Street, where North Philpot comes into Main Street. This one room building was of frame structure with plain windows. It served also as a school house.

During the latter part of 1856 the church asked the Annual Conference to make Cedartown a station. This was done with Rev. J.W. Trawick serving here during 1859-1860. During the war years it was combined with Cave Spring and made a half station. In 1872-1873 it was merged into the Cedartown-Van Wert Circuit and in 1874 it was made a full station.

In 1871 the Church and land was sold to William Peek, father of the late Capt. Julius A. Peek. He purchased the old building for the sum of $1,000.00 and donated it to the colored people for a house of worship. The proceeds were invested in the construction of the more commodious and up-to-date brick building on College Street.

This new building was just a straight four walled building with two flights of steps and two doors in front. Through the center of the house was a partition which separated the men’s side from the ladies’ side. The first Sunday School was organized by Mrs. Harriet Huntington Noyes. The Missionary Society of the Church was organized in 1877.

When the church was remodeled in 1887 the wings and vestibule were added, the windows changed and frosted glass used. The choir loft was built later and stain glass windows added. The first parsonage was built in 1877. Rev. W.D. Anderson was pastor at that time. The second parsonage was built in 1908 and was renovated in 1949. The Sunday School Annex was begun during the pastorate of Rev. Frank Quillian, and was completed in 1924.

The Church during the pastorate of the Rev. Bob Kerr made a drive for funds toward the building of a new sanctuary and raised about $48,000. This was the nucleus for later campaigns which resulted in funds for the present building.

In 1952 the Church took the big step toward the new sanctuary in a drive for $120,000. Due to the consecrated effort of the pastor, the Rev. Roger Stone, and the Building Committee, pledges exceeded the goal and the new Church became reality. The cornerstone was laid May 10, 1954, by Bishop Arthur Moore. The building was completed and on November 14, 1954, the Opening Worship Service was held in the new Sanctuary with Bishop Arthur Moore delivering the sermon.

Under the leadership of the Rev. Roger Stone, all debts on the property were lifted in three years time and on November 10, 1957, Bishop Moore was again present for the Dedication Service. The Church of Cedartown, as well as other churches in the Rome District, was fortunate to profit from the dedicated leadership of its former pastor, District Superintendent J. Hamby Barton, and his wife, “Ma” Barton, during the years 1954-1958.

In October 1958, the church purchased the Willingham property which adjoins the Church grounds on the south, consisting of a lot fronting on College Street and extending westward to Bradford Street, together with two houses and a garage. Rev. Arthur Gilmore was pastor at the time. The house on College Street was used to further the Christian Education program of the church; it was used as a meeting place for several church school classes and as a youth center. In the summer of 1962, the house at 109 Bradford Street was furnished and became the residence for future Educational Assistants (or Director of Christian Education) of the First Methodist Church. Rev. and Mrs. Larry Green were the first to occupy it.

In 1963, during the pastorate of Rev. Douglas Gibson, the Church bought the property of Mrs. George Vance which adjoined the church grounds on College Street. The house on this lot continued to be known as “The Vance House” and became the meeting place for classes in the Church School Youth Division. It was also used as a Youth Center. The house on the Willingham property was torn down in 1964, and this area was used for outdoor recreation and parking.

The Church was growing and more Church School space was badly needed. In April 1963, two committees were appointed: the Building Committee to develop plans for a new educational building and the Building Fund Committee to plan a financial campaign. The architects were selected in 1964. A Building Fund Crusade was conducted and construction began in the fall of 1966. Rev. Ralph Hawkins, minister at this time, was instrumental in making this dream become a reality. On September 10, 1967, the new Educational Building was consecrated by the Rev. Dumas Shelnutt, District Superintendent.

The Church was especially proud of the fact that one of its own young people had decided to enter the ministry. On October 6, 1965, John Cowan, son of Mr. and Mrs. Sam Cowan, was recommended by the Quarterly Conference for a license to preach.

In the summer of 1968, the purchase of a new parsonage was deemed necessary in light of extensive costly repairs needed to the existing one. The Church purchased the home of Mr. and Mrs. Olin Gammage, 235 Lakeside Drive; Rev. Jim Winn and his family were the first to occupy it. A Stewardship Crusade was conducted in the fall of 1968, and pledges of almost $125,000 were received toward budget and building purposes.

Exciting progress was made in 1969 when the Church assumed a basic share of the salary support for a missionary family in Liberia. For the first time, we had our “own” missionaries, the Rev. and Mrs. Paul Sundar.

This history, most likely written in 1969, was tucked away in the papers of the late Weesie Woodruff Parker and does not list an author. Not only does it recount the earliest Methodist Church history, but also includes a timeline of homes, buildings and land associated with the Church.

Download 2022 Membership Form
Or, fill out the form on this page and we will mail one directly to you!