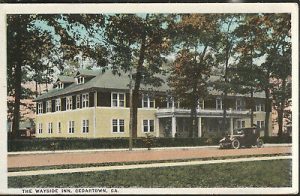 The Wayside Inn was built in 1920 by the Adamson family and was used by the employees of the Cedartown Cotton and Export Company as a community center and clubhouse.

The building was damaged by fire in 1926, but was soon repaired.

When built originally the Cedartown Inn was designed to be a replica of the Wayside Inn near Boston, Massachusetts referred to by Nathaniel Hawthorne in some of his writings. (That structure still exists and is in use today.)

The first manager is remembered as a Mr. Kimball, who often entertained the Sunday night dinner guests with his piano concerts. Among the Inn’s early managers were a very popular couple, Mr. and Mrs. William Booth, who came to Cedartown from Texas. During the proprietorship of Mr. and Mrs. G. M. Norman (1936-1941) the Inn’s meals gained a recommendation by Duncan Hines Company and was listed in their Travel Guide.

In 1941, the hotel property was bought from the Cedartown Adamson Estates by W. W. Faw who completely renovated the building during 1949. At this time the dining room and kitchen were changed from the west wing to the east wing of the building.

Other operators since Mr. Faw’s time have included Mr. and Mrs. Goddard, Mr. and Mrs. George Vestal, Mr. and Mrs. W. B. Harn, and Mr. and Mrs. H. B. Woolf. One of the owners of the Wayside Inn was Mr. Clifford Fite, of Fite Wholesale Grocery Co. Miss Annie Champion managed the dining room at that time and in the late 50’s Mr. and Mrs. Oscar Gore managed the Inn and were commended for their meals.

The Inn has long been popular for many social affairs as well as a meeting and dining place for the local civic clubs.

It was purchased and again renovated and redecorated by Mr. Charles Buice and his daughter Laura, of Cedartown. Then Tim and Kathy Haley were managers until the 1993 tornado and snow storm almost destroyed the building and the 100 year old oak trees had to be removed from the property.